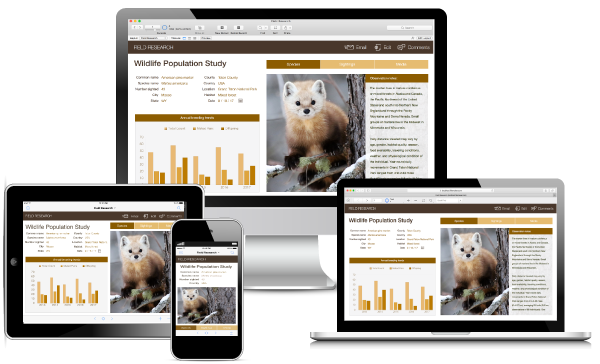 FileMaker 16 was just released and that blue color scheme is not the only thing that's new! FileMaker 16 is debuting with some exciting updates for both Windows and Mac users.

- The Window's version of FileMaker now has independent windows!
- FileMaker Go now supports animation and transitions with scripts, enhanced signature capture, and custom paper sizes.
- And among the many new features in FileMaker 16 for developers – you now have the ability to copy and paste value lists, utilize an enhanced data viewer, and integrate with new JSON functions, enhanced cURl options, and external script steps.

For a complete list of new features and to buy your upgrade today (at a discount) check out www.buy-filemaker.com.

To prepare our products for the FileMaker 16 release, we've implemented FileMaker external script steps in all of our plug-ins. These scripts will only be accessible when the plug-in is run in FileMaker 16 and allows a developer to specify plug-in functions as script steps instead of as calculation results.

Using script steps instead of the more traditional methods can make scripting within a solution more direct, as well as help with data entry validation. Some functions accept calculation-style input, while others accept a Boolean “true” or “false” option, and others employ a drop-down list for the developer to choose an option from. As stated earlier, the functionality of the plug-in script step is identical to its functionality as a calculation function.

Here is a video from our CEO, Marc Larochelle, with more information about external script steps.

Currently, all of our plug-ins have been updated to provide this plug-in script step functionality when used with FileMaker 16. Along with the external script steps, calculation functions will still be provided for use in development; this is to ensure that scripts already integrated with any of our plug-ins will still be viable and functional, and the developer now has the option to utilize the plug-in script steps at his or her discretion.